So here I was struggling a long day with very low energy(thanks to the ever so wonderful Clean 9 diet). Like classes weren't bad enough today, I was to face a new low: Tagged as being inconsiderate.
So here is something rich from the inconsiderate buffoon.
Amidst all the confusion that the day I entailed, I made two roundtrips from the enchanting MICA campus to the always enticing city of Ahmedabad. Do not fall for the prey. After threading all these miles to mitigate a friend's pain, here I was asking to be given a chance to grab a bite. And believe me I swallow my Subway at the speed of lightening. But that was not good enough.
My friend thought passing some of his pain onto me was absolutely the need of the hour. So here I was accused of making someone wait and my crime was such: I chose to take a break of 10 mins between the to and fro and the man waiting has an early morning flight to catch: Time 7 am. Time on the watch: 10 pm.
So after a mild outburst, I decided to just finish the task I was set out to do. Transport two absolutely capable men to their beloved friend of few days.
Time on the watch: 11 pm. At another end of the city.
Time when I realised I had had enough: 12:30 pm. Men referred to earlier were busy drinking and smoking, discussing Karma. Morning flight who?
Time 1:37 am: At this very hour, all I request people to do is stop taking others for granted. Just cos I don't say anything doesn't mean I don't feel it. And yes men throw tantrums more than any women were capable of!!
Posted by Sheena Agarwal at 1:26 AM No comments:

Story of an abandoned newspaper

It was at a particular day the most sought after everyday objects. Containing the details and the insiders view on 7/11, it was quite something. People were indeed ready to pay a premium to own this paper, to capture details of a day that would go down in history.
After minutes of arrival, it was picked off the shelf by this self made, reassured man. Or well thats what he seemed to be. After traveling through the streets of PrimeDale, here it was, on his desk. Unlike the urge to pick it up, the man decided to give it sometime before the paper regained his attention. For all the churning and pain staking traveling the paper underwent, it got 10 minutes or less of the man's attention. Why? New technology had replaced his cause. He was not just an everyday routine and not a part of the morning coffee+paper equation.
And before much realisation was brought about, there he was making its way to the recycle bin, to continue its everyday mundane task, filled with dismay and questions lurking.
Its odd how over time, we might sometimes take up the role of a newspaper in somebody's everyday routine. After passion follows ignorance would be the notes that will be sung. After every confrontation, we will churn around to another day of nothingness.
Is there is a time when you can stand up and say: I am a quitter and I am proud of it. Just cause you are afraid does not mean you have the right to belittle me.
Posted by Sheena Agarwal at 11:48 PM No comments:

Email ThisBlogThis!Share to TwitterShare to FacebookShare to Pinterest
Labels: command, newspaper, stand up

What has become my today!

Threading my path, down the now known walkway, I think about yesterday. Nothing of this was there, there are no connection, but there is some kind of symbolism. There is still that emptiness, yearning, regret~~ and me!!
Somehow amidst all the chaos that engulfs me, there is this void. Dont know where it comes from but something too obvious for me to dismiss as mindless rambling. My feelings seem to have lost its soul. The essence is lost in this search...
what has become of my today is nothing of what I had imagined it to be. I really wonder when my tryst with life is going to attain its finale!! How i got here, I dont know. Why, maybe its just me to be blamed..
Being cryptic is an art I have mastered to an extent I dont know how else to be. Like future is enough for me to wonder over, now I have today to wonder about. It right when someone said, at times in life your chase for success gets the better of you and when you want to turn back and wish for your past to tag along, its only roadblocks I see behind me. Spending years creating this blockade, now I have forgotten the return path~~~
Is it really as bad as this piece makes it seem.. maybe not.. or maybe having said all this and more.. I again go back to living in denial.. and this part of me lives happily ever after!!!
Posted by Sheena Agarwal at 2:29 AM No comments:

I am a self acclaimed romantic.. I see romance in the air.. the flowers.. the sky even the cup of coffee I drink every morning.. a believer of eternal love.. in the quest to find one for herself.. hopelessly in love without any expectations.. which is a first.. Wondering every hour is she will ever be loved back?
Not meaning to be overtly dramatic here but with time the want to be wanted overshadows every other feeling thats there. The sense of belonging overcasts basis sensibility. Its like the race in which getting ahead of yourself only brings more dejection.
I thought it was a broken heart but eventually learnt that its nothing but a heart that yearns for better and more. a lot more.
My girlfriends might get annoyed listening to that one name for years together, consoling me through those nights, have be reject perfect guy for they are not him. Just a stupid girl waiting to be wanted, in the smallest of ways, acknowledged for all that has been there and not belittle how she feels.
For how may years can she be expected to strong about it all... And when she snaps.. She is a traitor!!
Posted by Sheena Agarwal at 2:07 AM No comments:

At a point in time when yesterday is over and tomorrow is here.... I wonder what this moment holds for us...The purpose!!!
I was asked the other day if i knew what the purpose of my existence was...and with all the futile thoughts that surround me...this question never occured to me..
Do people know what the purpose of their existence is? Do people cheat themselves into believing that they know it all... at this moment I would be estatic to just know what my today holds.. If by the end of the day I feel that the purpose of my existence is fulfilled!! Again am i stopping myself from looking at the bigger picture and just being contended with the everyday existence.. is the drive within me dead!!
Posted by Sheena Agarwal at 12:02 AM No comments:

I am sure the title suggests what I have on my mind..but a little clarification there..I aint intending on treating this spot as a punch bag but explain how a punch bag must be truely feeling having been there myself more often than not..
The phone rings and struggling with myself, I take the call..Some trivial issue on the other line that could have waited till the next morning..I am inthe middle of something important and voila..I am taken to a corner where no one can hear no one..and there.. another of those SOB stories..I mean I am happy that people think they can confide in me..But there is a time and place everything..
There are days when all of us dont feel at our best. We want to just keep to ourselves. Not bother anyone or be bothered. Like people will let that happen. They will dig till u start to talk and just then snub to to talk about how on that one note their life is so much better..Yeah hearing about that really will cheer me up..People should try and be a little more sensitive at times...Would be appreciated!!!
So thats how it feels like being the agony aunt all the time...I think this post could be named the chronicles of an agony aunt..
Posted by Sheena Agarwal at 3:34 PM No comments: 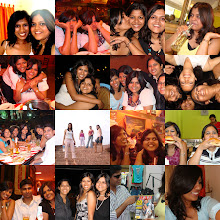